This certificate showed up in a desk drawer and it reminded me of the various Amateur Radio Organizations there have been in Canada.  In 1920 the CRRL or Canadian Radio Relay League was formed as a branch of the ARRL.  In 1967 CARF  the Canadian Amateur Radio Federation was formed and it was independent of CRRL.  In 1993 CRRL and CARF joined forces and became RAC or Radio Amateurs of Canada and RAC is still our national organization.  The provinces and territories have their own organizations and ours is The Nova Scotia Amateur Radio Association, or NSARA. 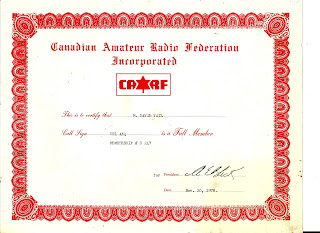