Our club president Bernie Bonnar (VE1UT) became a silent key early in the morning of January 30. 2021 in the Yarmouth hospital.  Our national organization Radio Amateurs of Canada (RAC) chooses a nominee to be their Amateur of the Year and members of the club's executive, along with Bernie's wife Veralyn (VE1VAR) composed an application nominating Bernie for that award.  We intended to keep it a secret but when Bernie's health kept deteriorating, his daughter Bernadette read it to him in his hospital bed, so he died knowing how much he was respected by his ham radio friends.  Here is the application.  We don't yet know if he was chosen.

Bernie was born in Tracy, NB 1n 1932 and at the age of 15 he developed an interest in Amateur Radio and acquired a war surplus R1155 receiver, a code practice oscillator and a hand key.  He acquainted himself with several established amateurs and listened to and practised Morse Code until he felt comfortable enough to write the Amateur Examination

which he did in 1950 and was assigned the call sign VE1UT which he still holds 70 years later. After the mandatory year on CW only, he passed the Advanced Amateur exam.

Bernie worked in several different areas, always setting up a station wherever he went, his final career was with the former CNCP Telecommunications which took him to various locations in the Maritime Provinces and occasionally into Quebec.  In 1970 he moved to Yarmouth and joined the local amateur radio club where he held several offices and was an instructor when the club conducted courses.  He later settled in Hebron, a village near Yarmouth.  Bernie was a pioneer in the use of the VHF and UHF bands in this area and was instrumental in the setting up of our first VHF repeater, building or supplying many items such as antennas, preamps etc.  When IRLP came into use, he built and installed  220 MHz Yagi antennas for a link between the local REMO building where our club station is located and the repeater site and supplied and installed the linking radios at both locations.

He was instrumental in setting up a communications room at the Yarmouth REMO and another one at a secondary site outside of town in case the first one becomes unusable.   He arranged the acquisition and installation of an HF transceiver at the secondary site that is remotely accessed via the Internet, making the Yarmouth club the first one on the East Coast to have such a facility.  It’s available for club members to use if their equipment is down or if they are unable to have an HF antenna at home.  One member used it during an 8 week stay at a medical facility in Halifax and made daily 80 and 20 metre contacts with friends.

Bernie developed an interest in EME operations and built a huge antenna array for that purpose and made many contacts all over the world.  His property became known among local hams as Bonnar’s Aluminum Farm.  A big wind storm wrecked the installation some years ago but he still keeps in touch with EME operators by other means.

He was a leader in supporting Field Day operations and often operated at our installations all through the night.  He organized and set up a station at Cape Forchu Lighthouse at the mouth of Yarmouth harbour for two separate Lighthouses and Lightships on the Air events, both of which were very successful.  He serves on the board of the local EMO (now known as REMO) and participates in their exercises, both table top and in the field.

When he learned that a federal government department was disposing of a number of VHF mobile and hand held radios he arranged for our club to receive many of them and then had them programmed for local fire departments and the Ground Search Team.  He was a member of and the communications advisor for that team and received an award from the RCMP for 25 years of volunteer service to the team.

Bernie served as president of the Nova Scotia Amateur Radio Association and held regular on-the-air meetings as well as composing a monthly newsletter which, in the days before the Internet, was printed and mailed to the members.

t the age of 88, Bernie is the respected Chairman of our local club and we hope to hear Victor Echo One United Tango on the air for a long time to come. His wife Veralyn is also an amateur with the call sign VE1VAR and his son Mitchell holds VE1BJE.

Congratulations to our club member VE1HQ (Sheldon) for making the WAP-WADA Honor Roll!

The club's annual general meeting was held in the REMO Yarmouth building on October 20, 2020 and the incumbent executive officers were re-instated for the 2020-2021 session and are as follows: 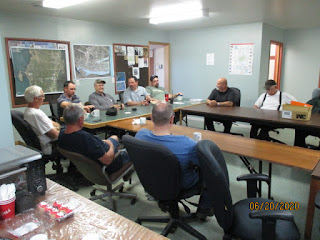 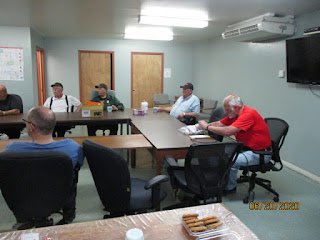 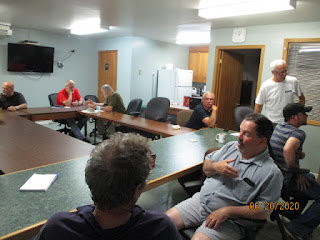 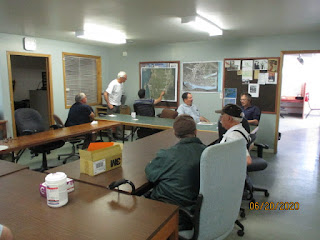 Many hams make a change of call sign over time and it’s hard at first to adapt to the new one.  Here are the call signs I have used on the air in the past 63 years:

Lots of opportunities for mixups! 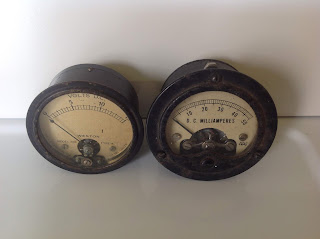 For guidance in social distancing, this is an illustration of Two Meters.
Posted by David Vail - VE1GM at 13:00 No comments: